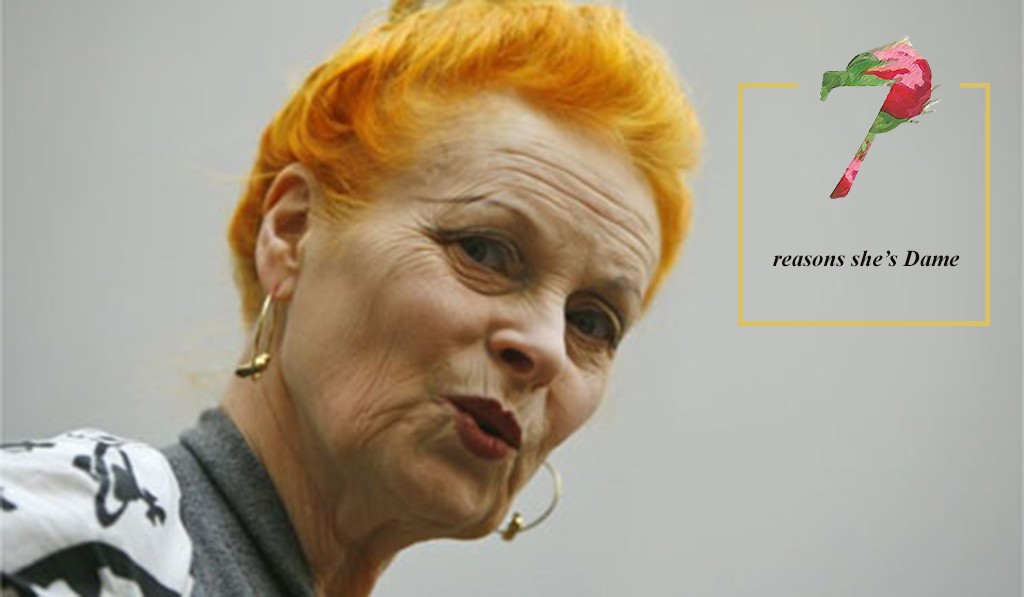 Vivienne Westwood, the Queen of Anarchy, a force for Fashion, a pioneering political advocate and a no nonsense woman of worth! If the 74 year old can’t be made Queen then here’s 7 reasons why she’s definitely a Dame!

Since the 70’s the fiery red headed Beau fearlessly spearheaded a struggle against global and national fascism through creative means. With pleasing grace and style she is a maven of unflinching non-conformity, never afraid of telling the older generation that, “We don’t accept your values or your taboos, and you’re all fascists.”

Her interpretation of tradition allows her to successfully undermine the status quo, whilst introducing more revolutionary creative critical thinking and practise.

Westwood had already established her own sense of royalty long before the Queen’s recognition; she started sewing clothes for herself at the age of 12 and studied fashion and silversmithing at the University of Westminster’s Harrow School of Art at 17.
Doubting her class background wouldn’t afford her the privileges of making a living in the art world; she dropped out to study at a teacher-training college eventually becoming a primary school teacher.
She bounced right back to her birthright in no time and her bolshie sense of ingenuity helped merge fashion and politics, using the anarchic punk movement as her muse. Alongside her partner and lover Malcolm McLaren at their boutique “Let It Rock”at 430 King’s Road, in the 70’s, she began dressing punk rock bands with bold and brash slogans, deconstructed traditional garments and DIY production techniques, giving her collections that added shock value.
Even through the boutiques evolutionary name change and Vivienne’s expansion she stays true to her humble beginnings, and her Vivienne Westwood label can be bought at what is now called Worlds Ends.

3: Provocateur – Art as the Weapon

Vivienne has never underestimated the privilege her platform has given her and she uses every opportunity to use her creative license as a double-edged sword, to speak up and out in the war against humanity and environment.
She uses her rapier wit to thrust at every opposing social structure from restrictive gender norms, fracking and  industrial farming to Scottish independence,

“We can only take democracy for granted if we insist on our liberty.”

She overcame her doubts and inferiority complex about class and the art world by championing the runways and returning frequently back to her Plan B pathway as a teacher. She is frequently called to give lectures about her career, donating her speaking fees to charity.

“A young person has experience up to a point, and they can do something and it might be very good, but you can’t do something for very long if you don’t have the ideas coming, you know? It doesn’t come just from you. You have to get it from somewhere.”

In 2007 she was approached by then Chairperson of Kings College London and asked to design an academic gown. On completion, Westwood commented: “Through my reworking of the traditional robe I tried to link the past, the present and the future. We are what we know.”

Through Viv’s day-to-day achievements we see that she is an active teacher, an activist, and a human rights zealot, always creating opportunities to support the ‘community’nationally and globally.

Her efforts to spread awareness about the protection of the peoples and world around us cross over into environmental activism.
Westwood also recently curated The Greenpeace Save The Arcticexhibition campaign which has taken over London Waterloo underground station until Sunday 26th July. Consisting 60 muted colour portraits of celebrities wearing a Vivienne Westwood Save The Arctic organic unbleached cotton t-shirt and all profits from the t-shirts go directly to Greenpeace.

The aim: to raise awareness for the protection of the unique and fragile Arctic and is situated along the escalators leading up to the London HQ of oil company Shell, who are due to start drilling in the Arctic this month. She sheared off her coral red locks, donating £1 million to rainforest charity Cool Earth and used her last Red Label AW15 show titled Vote Green to urge the population to vote for the Green Party.

“The main message we want to get out there is that climate change is caused by the rotten economic system. If we don’t change public opinion, we’re going to have mass extinction of the human race very, very quickly, in two or three years.”

She fronted and led protesters through the city for the #ClimateMarch in London on November 29, calling on the world’s population to act now.

Since her anarcho-punk days the core of her ethos was Anti Capitalist…
Since then she has founded Climate Revolutionan uprising for Protests, campaigns, petitions and public action for a better future

Her manifesto states that we are currently “controlled by the 1% of the world population who are in power. They preach consumption, and they preach war, and they’re taking us into disaster. We are in incredible danger. There is no point in voting for the others.”

In Viv’s Diary, she  explains how capitalism runs the world.

“…Give you a perspective. If you hold onto this perspective then you can work everything out for yourself, even down to the detail. Know what you should do. Everything is connected.
I’ve written everything down because I want to get it right. One step at a time.

Central Banks:  We have to start with the central banks which control the world’s economy. They do this by creating debt. (It’s actually a global Ponzi scheme).
The central banks are private banks. The US Federal Bank is one; they are organized by the Bank for International Settlement (BIS) in Zurich.
These central banks print money. Today they do this by pressing buttons. They create virtual money out of nothing.
This money is loaned to other banks, monopolies and governments. It has now become a debt.
The central banks prefer it if the loans are never paid because what they want is the interest – which accumulates out of all proportion to reality.
This means they always have fantastic amounts of money to lend and they don’t have to print
virtual money except in an emergency.
It also means that the central banks come to own everything – because they own the debt. How often have we heard of a poor country selling its assets and natural resources just to keep up with the interest payments on the debt it has been forced to borrow?

Monopolies:The monopolies work this system for the central banks. The monopolies do the actual job of wrecking the planet and exploiting its people (cheap labour). They suck up small businesses.

Capitalism:This economic system is called capitalism. Capitalism began 200 years ago and is now global. It is coming to an end. It is not possible to continue indefinitely using up the world’s resources. Capitalism is run on fossil fuels – which are more difficult to get and running out. You can’t have capitalism without fossil fuels. It began with coal and ends with oil and gas.”

Till this day still on her feet and almost 80, Dame Viv is one of the most consistent creative revolutionaries and political activists.
From DIY slashed tees and shock value slogans to whips chains and prostitutes to Pirate collections, Kings College academic gowns, and the new Virgin Atlantic uniforms Westwood surpasses herself with such self-surety and valour.
She is a force to be reckoned with and a great example for women, creatives and political activists who often feel overwhelmed by the often frightening realities, tales and trues of impending doom inflicted on us by those that lead us and by the ignorance in the bliss of precariousness we often choose to live in.
She wont stop and neither should we.