Sunday was chilly, grey and pretty much what you’d expect from London weather on a late afternoon in November. I guess the highlight was where I was heading, and I guess I must give some credit to my babe Roxanne for the swift journey.
Roxanne, being my trusted hybrid Land Rover Aero Pro.

Yes. My journey was shortened by 20 minutes but if you know me you know I still had something to complain about. Such is Life. After a dangerously slow right turn (a cowardly act of bravado on my part) onto Blue Anchor Lane in Bermondsey, I breathlessly left jumped off my 8 speed…
“Where can I put my bike?!” I mouthed through the translucent arch window.
Though it seemed like the beginning of a frustrating game of charades, my inaudible nonsense was understood and I was nonchalantly directed to somewhere, with what seemed like a disregarding hand gesture. Locked up. Strolled back.

Vulpes Vulpes was printed in grey at the bottom left hand corner of the same window, unobtrusive in it’s nature, it was number 17, I was here. 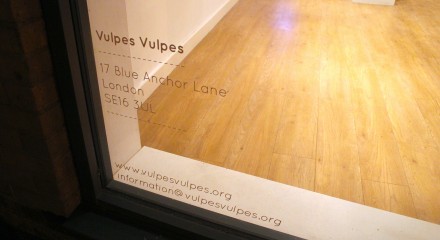 Clean, impressive first impression, a thought I kept to myself, as I pushed open the gallery door with a discrete grin of approval. Vulpes Vulpes, a not-for-profit gallery space in an old Bermondsey railway arch, originally founded in 2009 as “an artist collective, studios and project space in East London – hosting exhibitions, performances and educational workshops.”

This year they’ve opened the new space in Bermondsey, managed and run collectively by Carla Wright, Anna Stephens, Laurie Storey and Hadiru Mahdi; where they intend to “create a platform for emerging artists, encouraging them to engage with the space, its history, architecture and that of the surrounding area.”

This happens to be the second part of an exchange project, initially  Vulpes Vulpes were invited out to Brussels back in September, as part of their exchange project to presents an installation inspired by Botanical/Physics gardens at Abilene Gallery in Brussels. Check out the installation here – A Cultivar: Abilene presents Vulpes Vulpes. Welcomed into the warm, minimal, mysterious space, initially by three of five art pieces; to my immediate left an A3 photographic portrait titled ‘Meditation #1 (Coin)’ 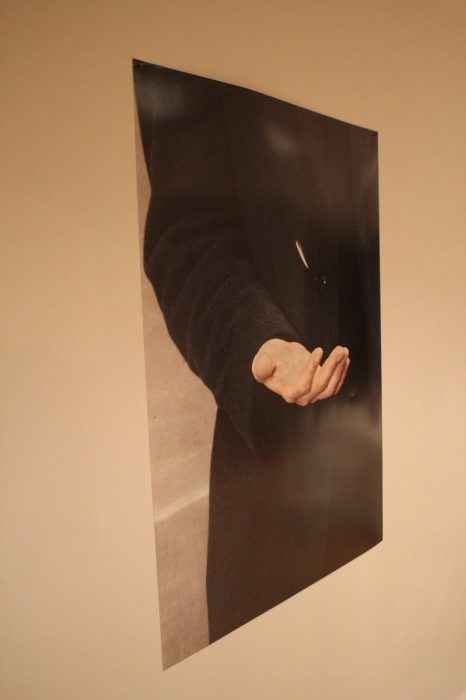 and straight ahead in the left corner, an inaudible video screened on a vintage 10 inch television, cresting a white pillar which faced what looked like a city of dog food displayed on a handmade ‘pew’ for dogs… I presumed after glaring at the moving image in ponderation. 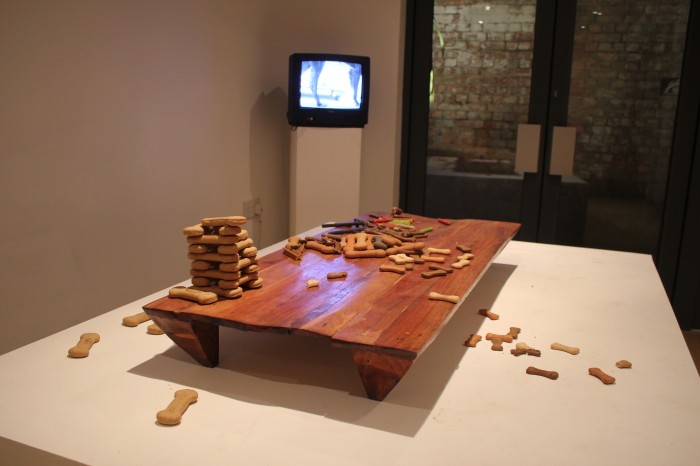 There were dogs scampering over the exhibition in obvious but seemingly discrete excitement, they were hungry it seemed. ‘Meditation #2 (Gift)’, visions of an opening night I happened to miss out on, a sad fact masked as acceptance I’ve casually inserted to remove feelings of lament within myself. 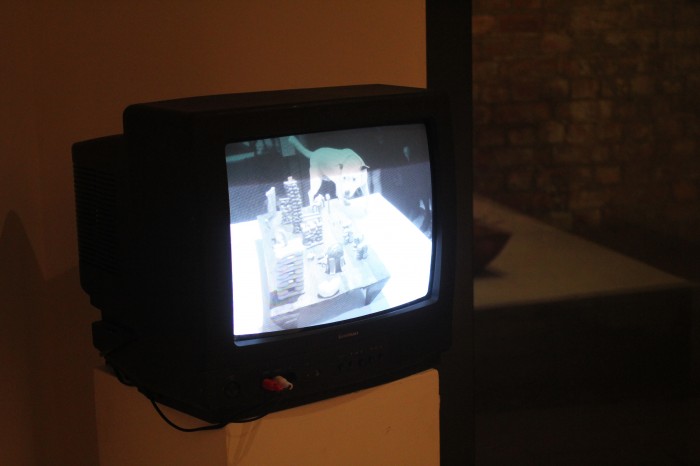 Searching for another interpretation apart from my own, after a 90-degree turn towards a nest, cradling an eyeball, hoisted midway between the ceiling and the floor,‘Meditation #3 Eye’ I oriented myself using the gallery map and turned the double-sided sheet to riffle through the press release where I was drawn in by some words in the first paragraph, typed in a font similar to Gill Sans Light. 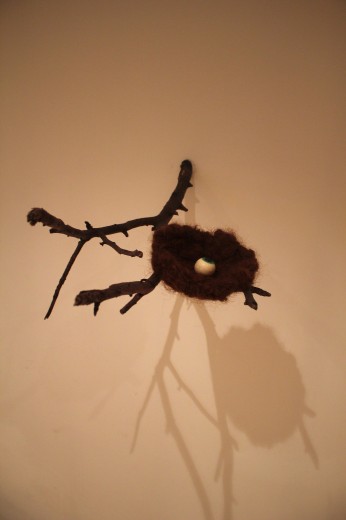 “Abilene was founded in 2011 by five French artists and took its name from a paradox defined by American sociologist Jerry B. Harvey. In his book the Abilene paradox and other meditations on management, he addresses the difficulties linked to decision making within groups. He describes how a collective dynamic can smother the true desires and convictions of the members of a group who, from fear of isolation and separation, behave in a way that is contradictory to their true will.”

Meditate on that!
Stepping through a double door exit into an entranceway, I was being watched, it seemed, by an A6 landscape photorealist graphite pencil drawing, of an index finger and thumb stretching open the skin and eyelids around a panicky looking eyeball. 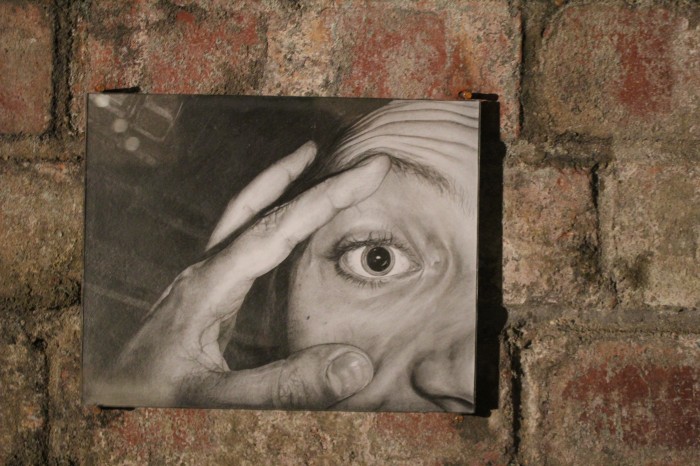 Hypnotised by the accuracy and drawn in by the emotional captivity in the draftsmanship, I caught myself and took notice of the brick mouth of what my imagination illustrated to me as the portal to a mortal soul-absorbing labyrinth.
No, just, well, not just, but it was the former rather than the later, to a partially empty, large, almost clandestinely confined space, featuring a monochrome motion picture of shallow waves intimately and steadfastly washing against a shore; exposing the basket handle structure of the arch roof which housed it. 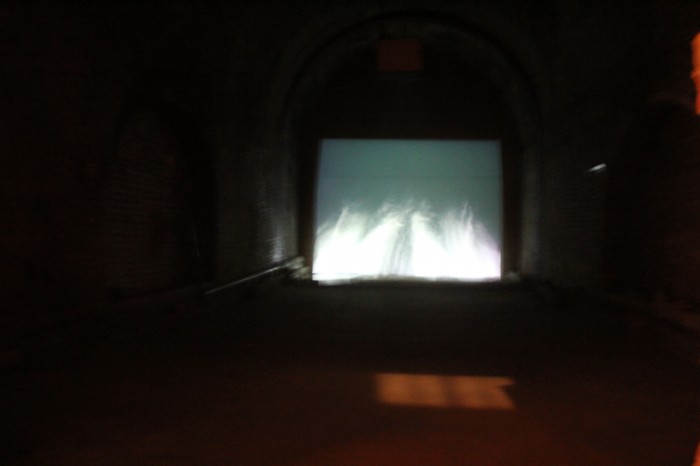 a feeling of reverential respect mixed with fear or wonder.

Yes, just the one word, but this is probably an accurate literal representation of my feelings, towards the situation in which I was the unassuming spectator.
The collective quintet curate and run a project in Brussels but don’t exhibit their own work there, however this is the first time they are exhibiting together as a group of artists.
Each fifth of this French collective submit to their individual art practises and come together to create these curatorial projects one of which is showing right now until the 24th November 2013, Saturdays & Sundays 12-6pm at:

More information on the following artists; Regis Jocteur Monrozier, Nancy Moreno, Raphael Lecoquierre, Louise Boghosian and Andrea Montano can be found at the click of this web address > http://www.abilenegallery.com