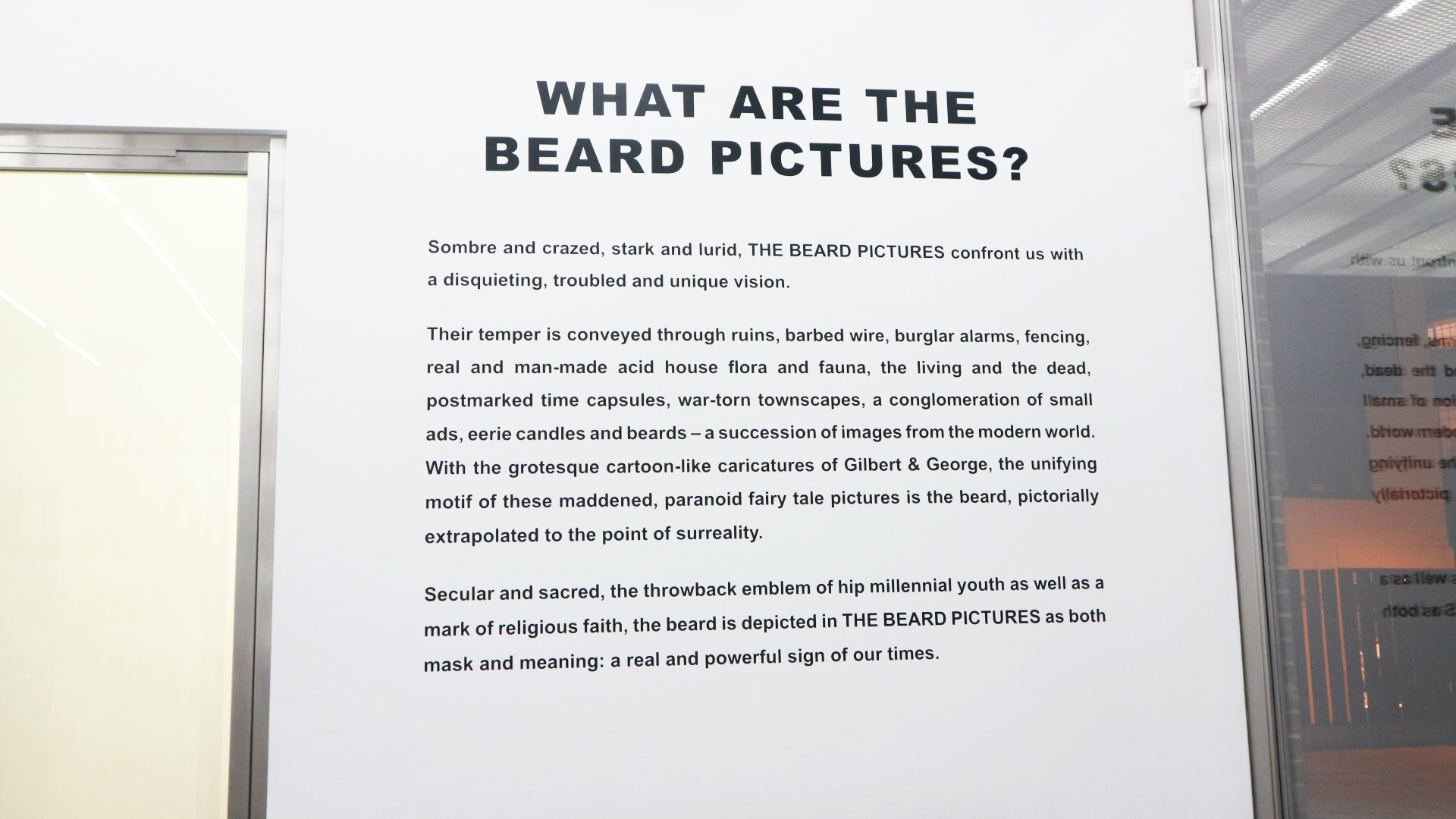 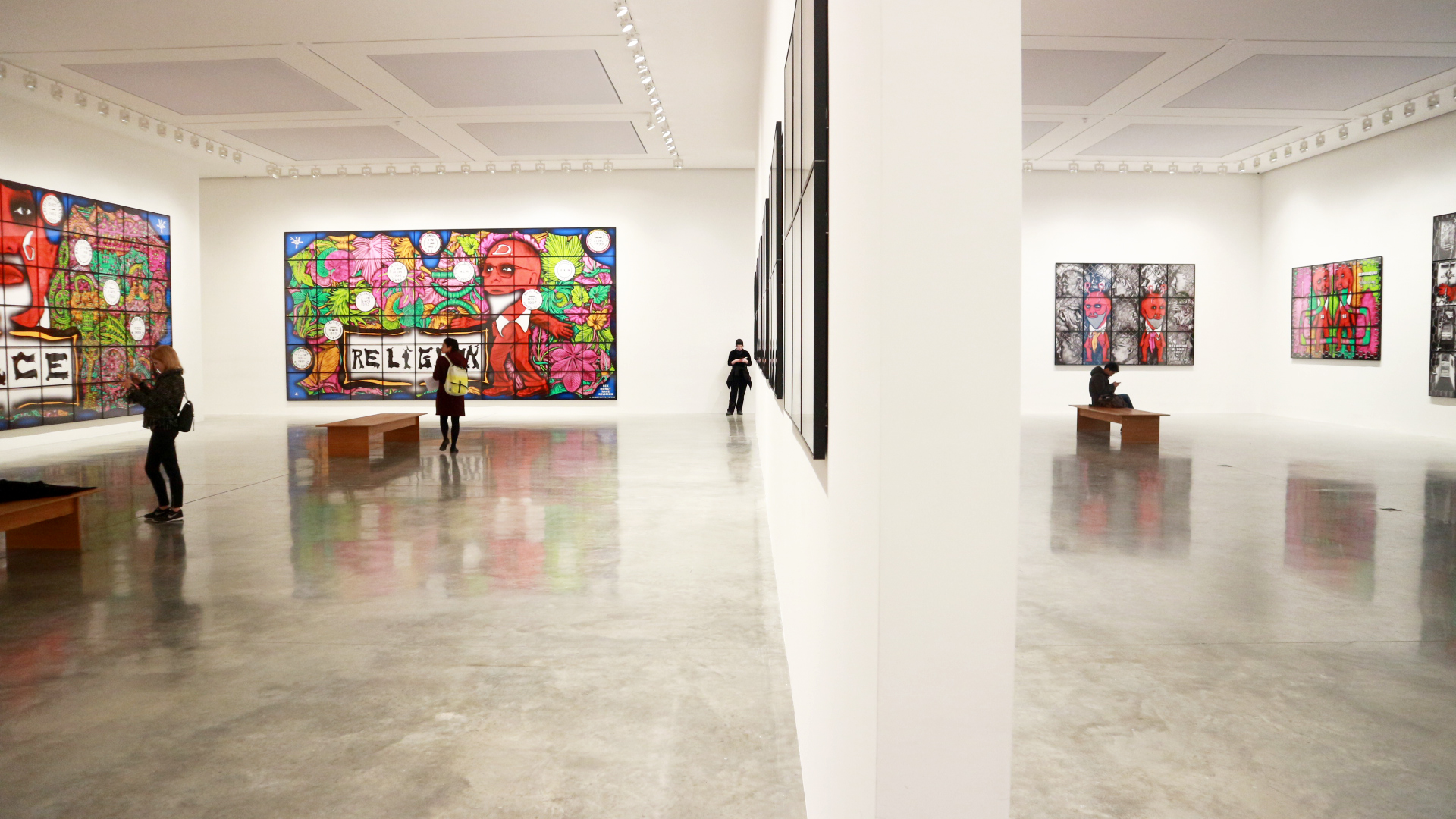 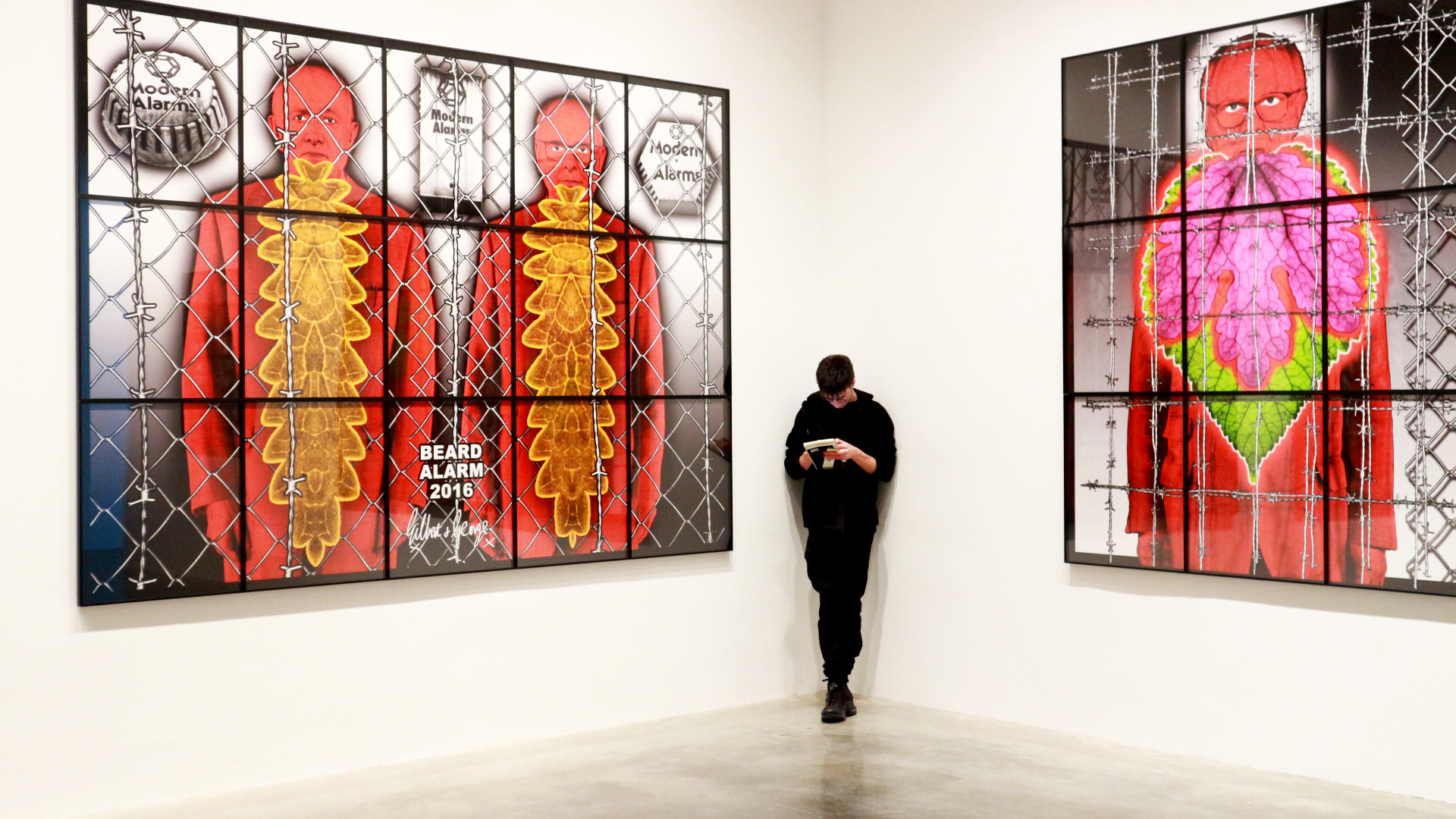 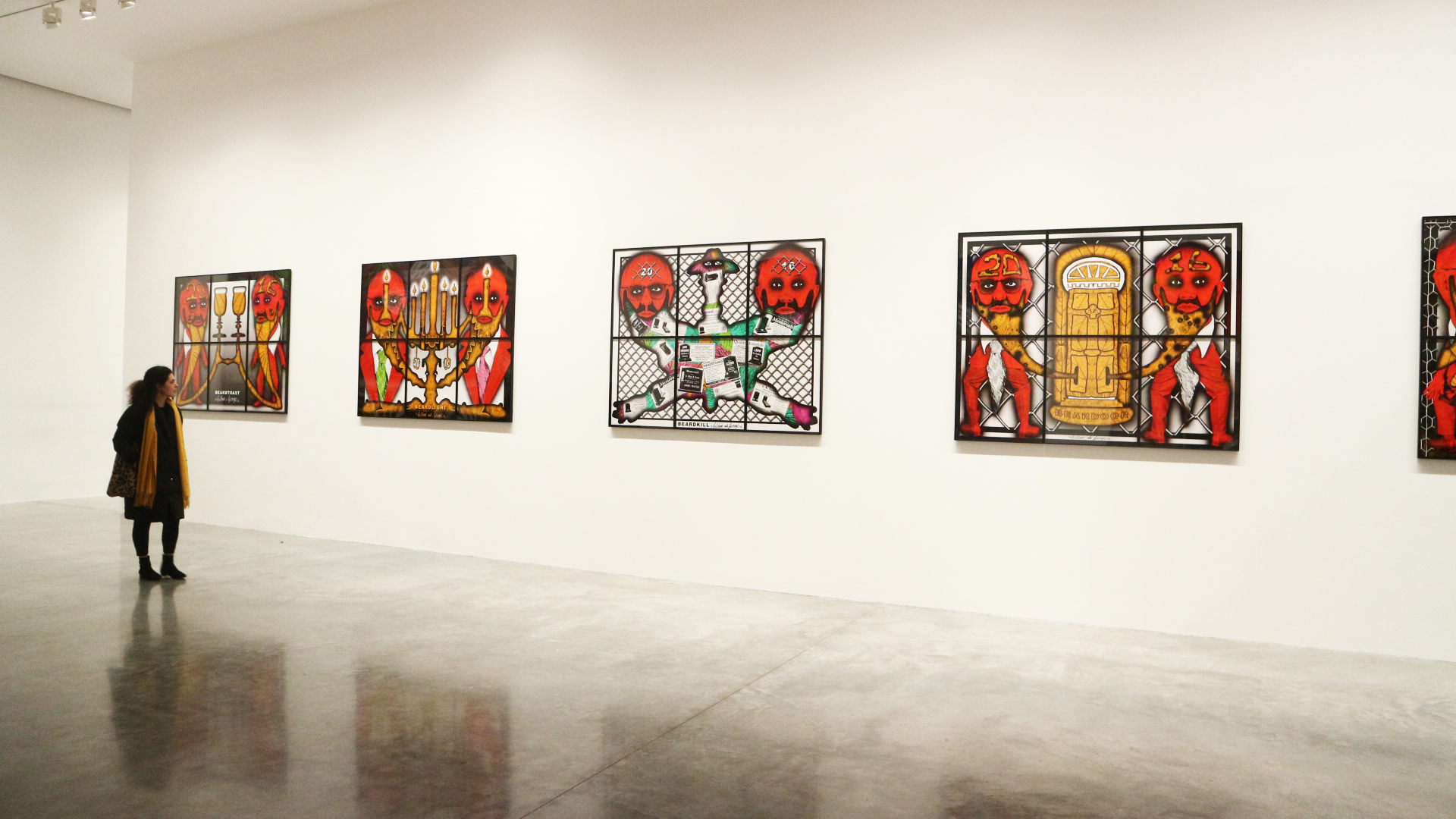 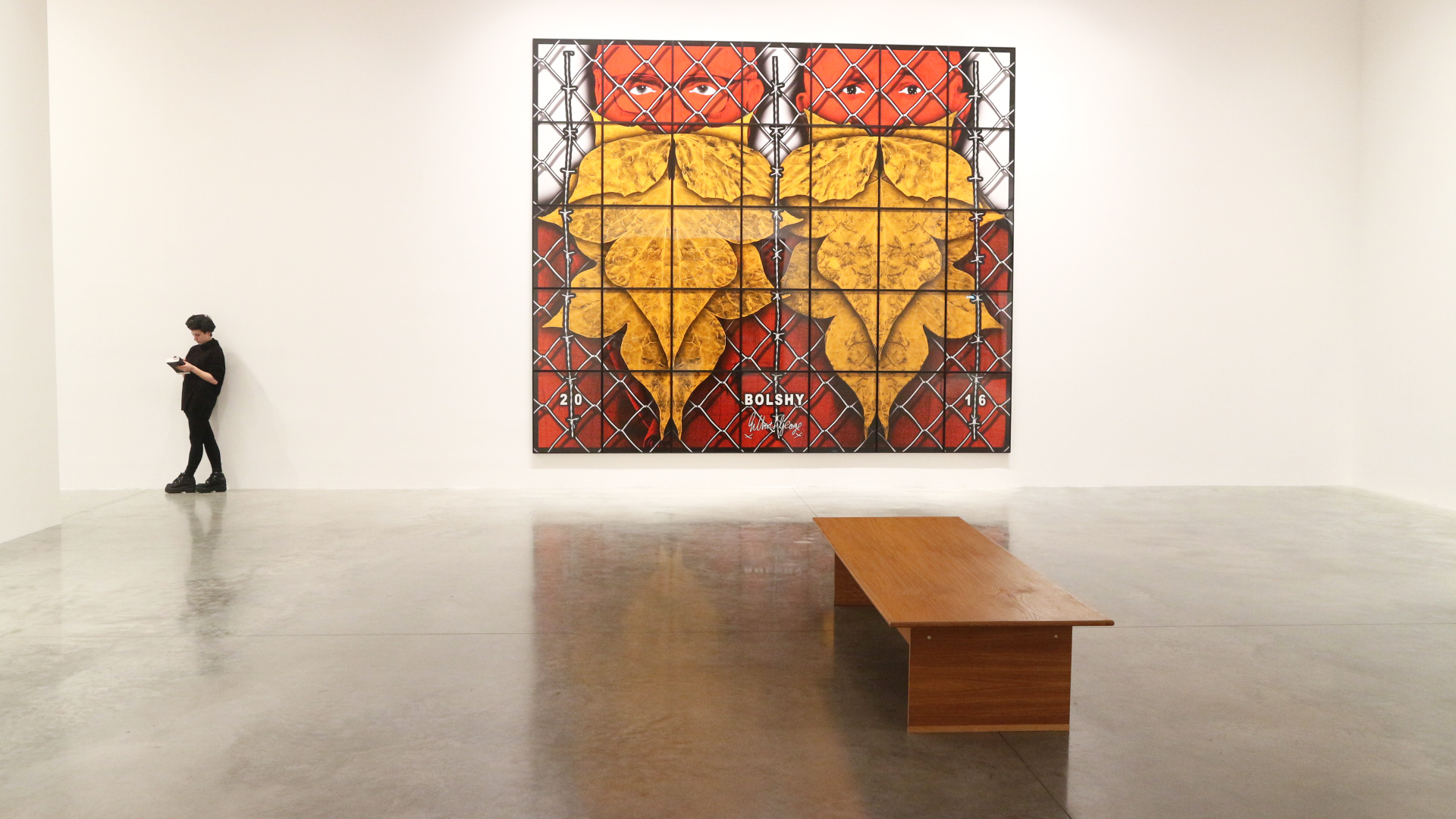 Towering capitals, questions, answers, responses, reprimands, statements, rhetorics. It was like a matrix of the human mind.

It was actually quite amusing, because it was quite blatantly British; the internal dialogue, the kitchen table banter or rather Public House chatter. Kept inside accompanied by pork scratchings, crisps, Bitters, Ales, and laughter that drowned into the clanging glassware that kept all this chatter check.
Never to be heard out of place.

Order. Order. Order . So much fucking order.
All the while surrounded by the chaos of a multicultural metropolis.
Race, Sex, Money, the three bad wolves that chase the little red Hood through the soot.
The red hood of Roses and Blood and Opium Pettles, scattered in the name of Religion for the conquest of Land and Loot.
The working class hurumph. The pain, the glory, the old wives stories.

Gallery goers seemed quite shocked and amused, almost exposed.
When that civilised debate about class and culture takes an awful turn, and Eff and Blinder take it in turns to silence the lies and the noise that swiftly carry the deceitful ploys, like the middle and index under a runny nose on a blisteringly cold British day.

“Up middle finger I show them!”
Who?
Two for those who knew and acted aloof, as though they never had a clue.  { Oa*} 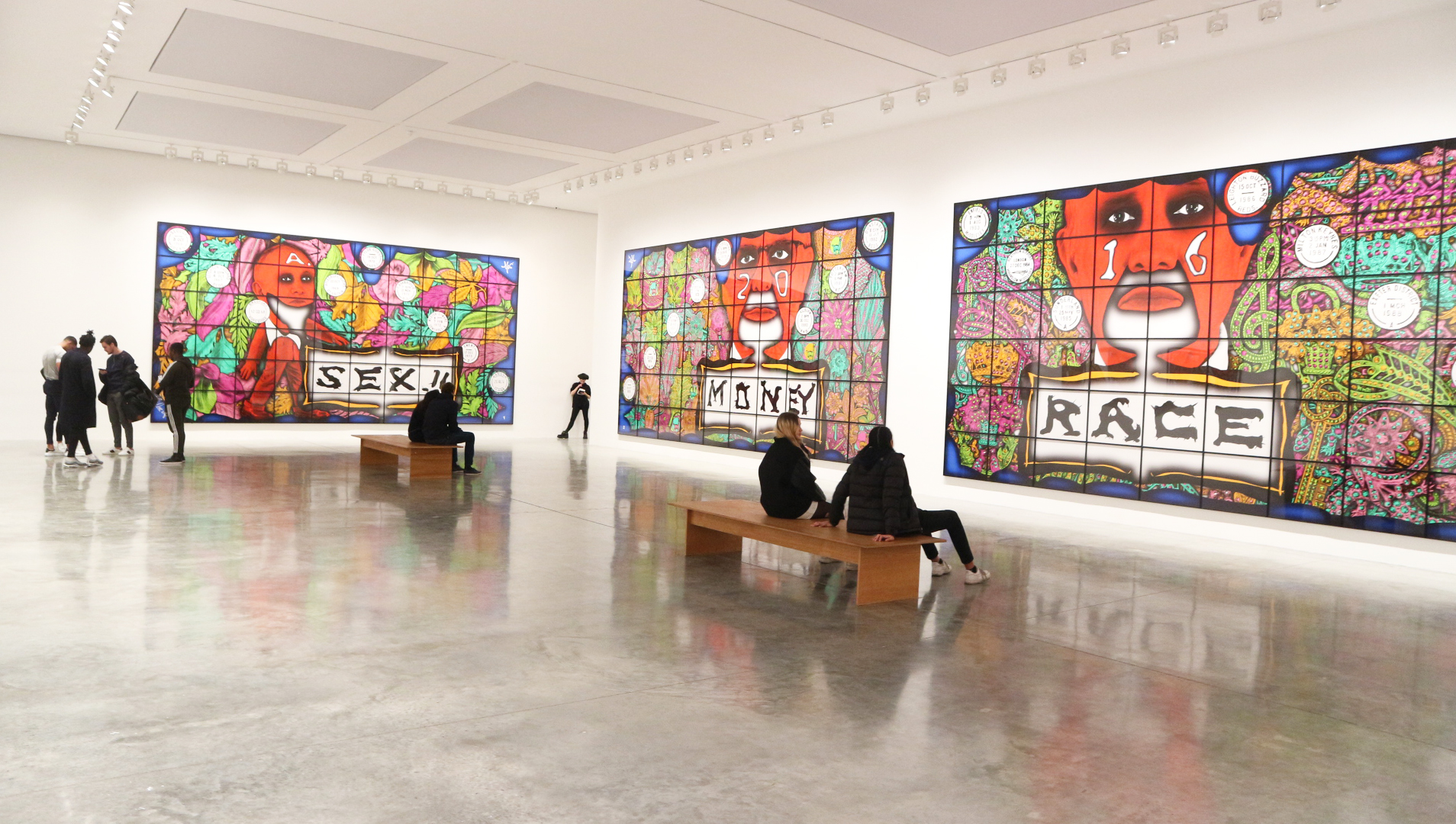 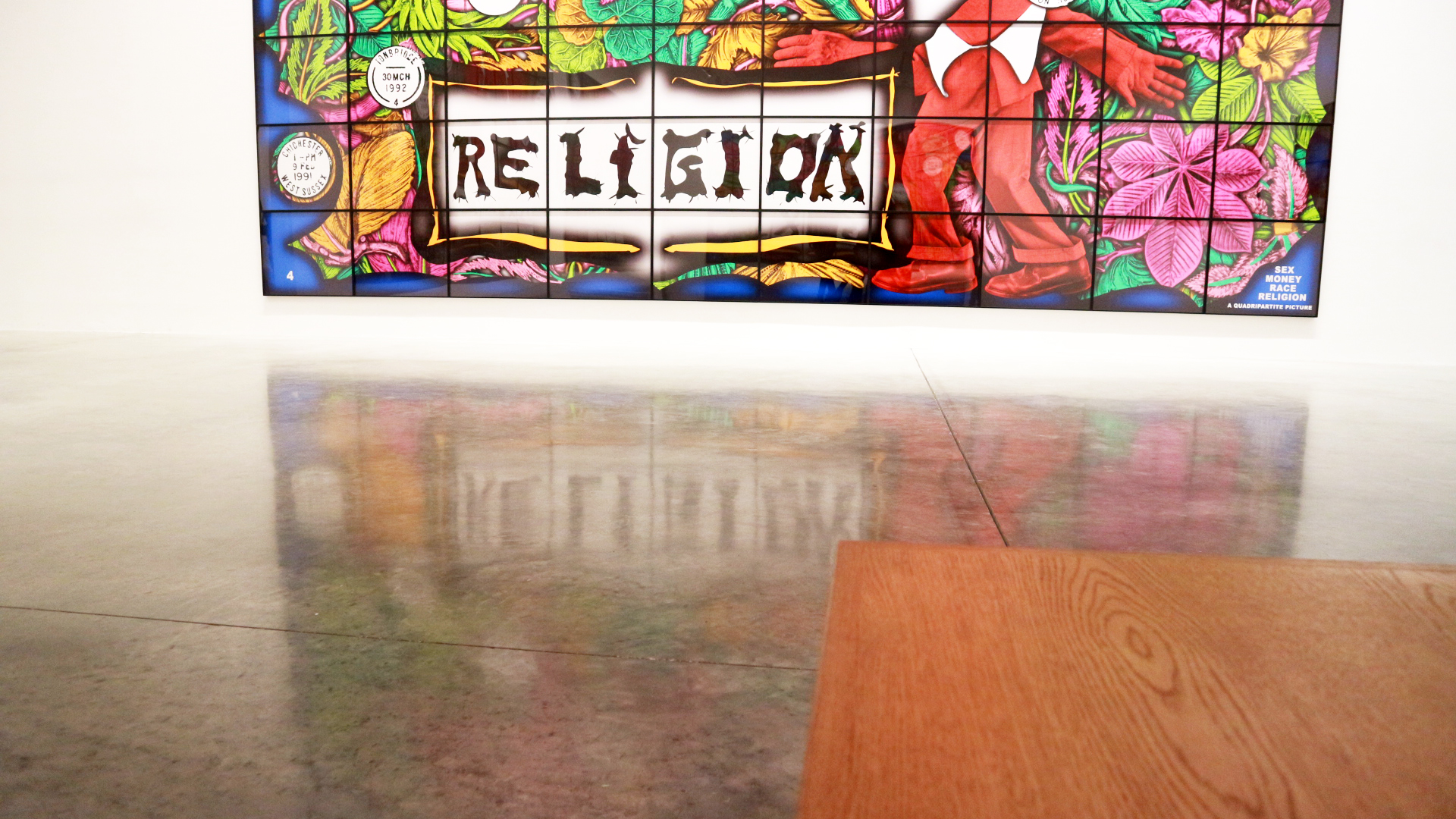 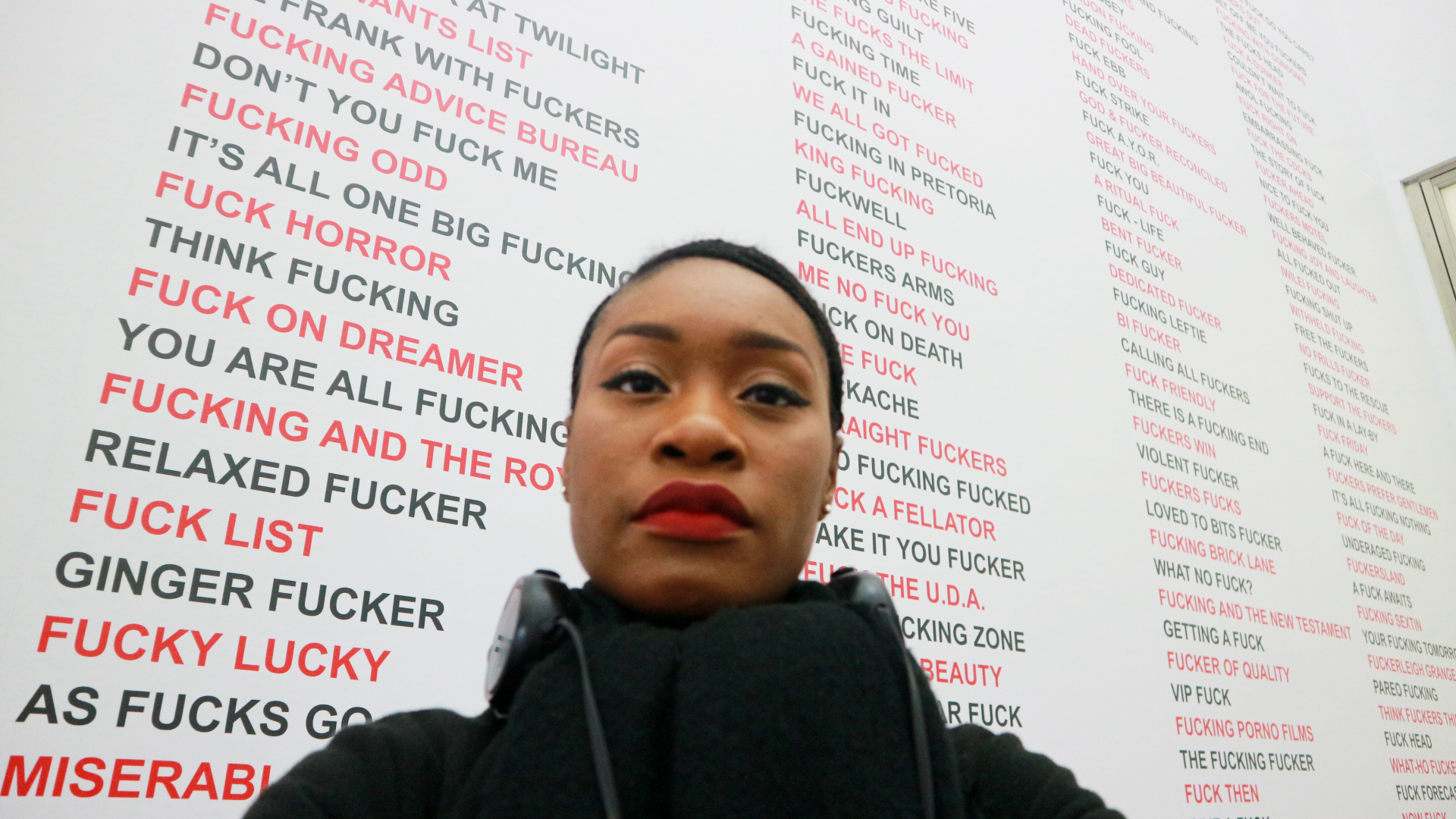 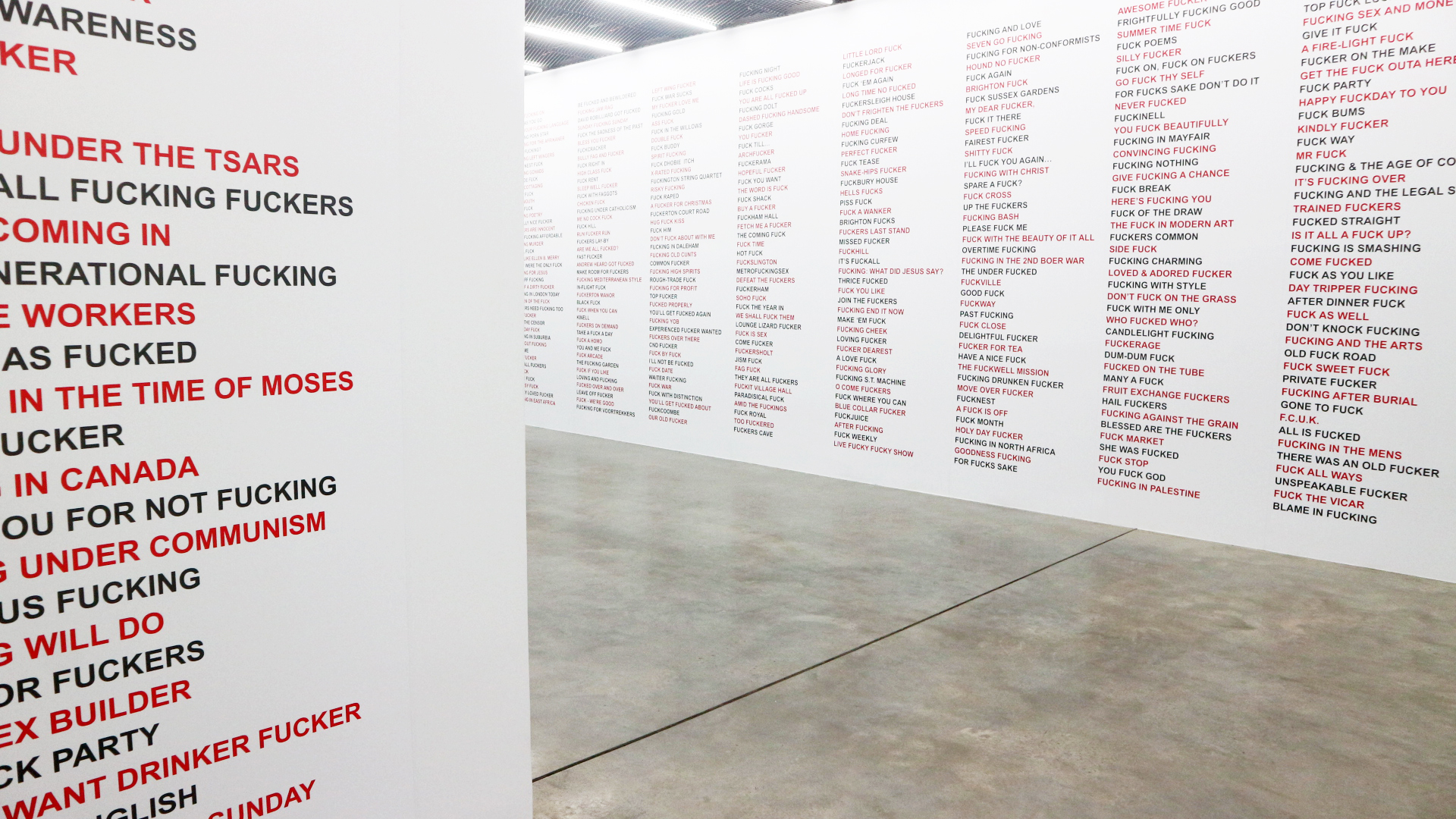 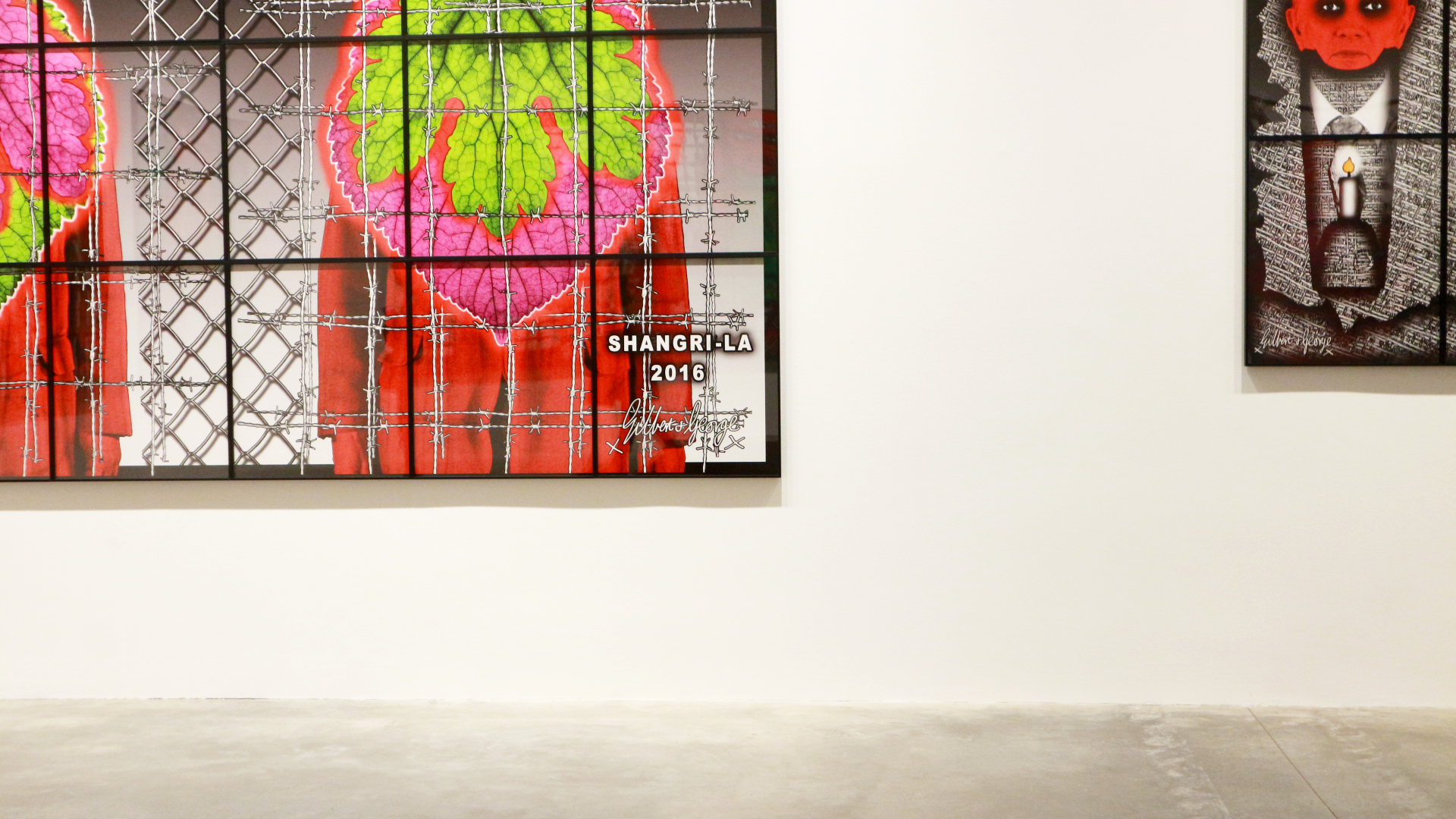 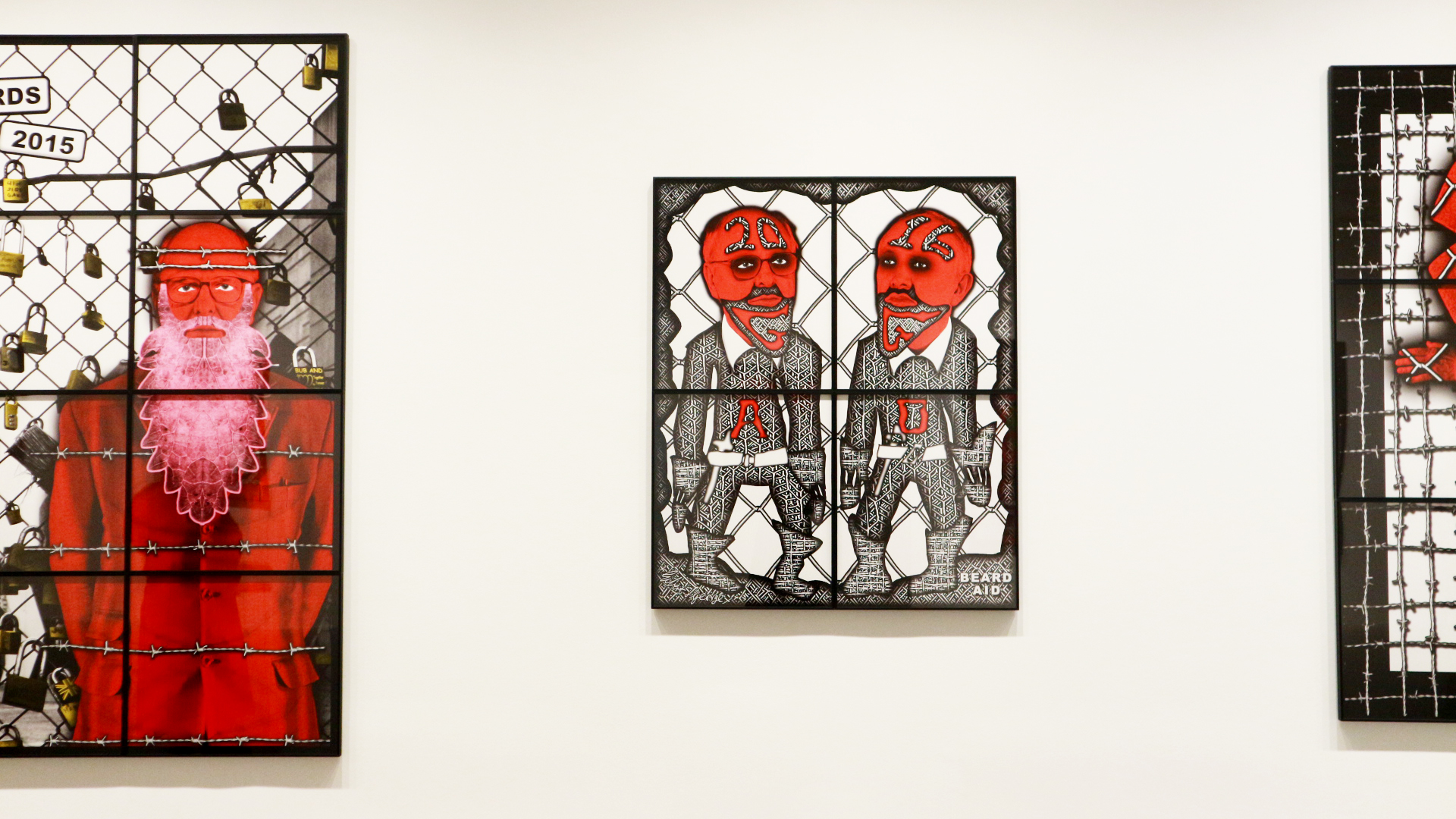 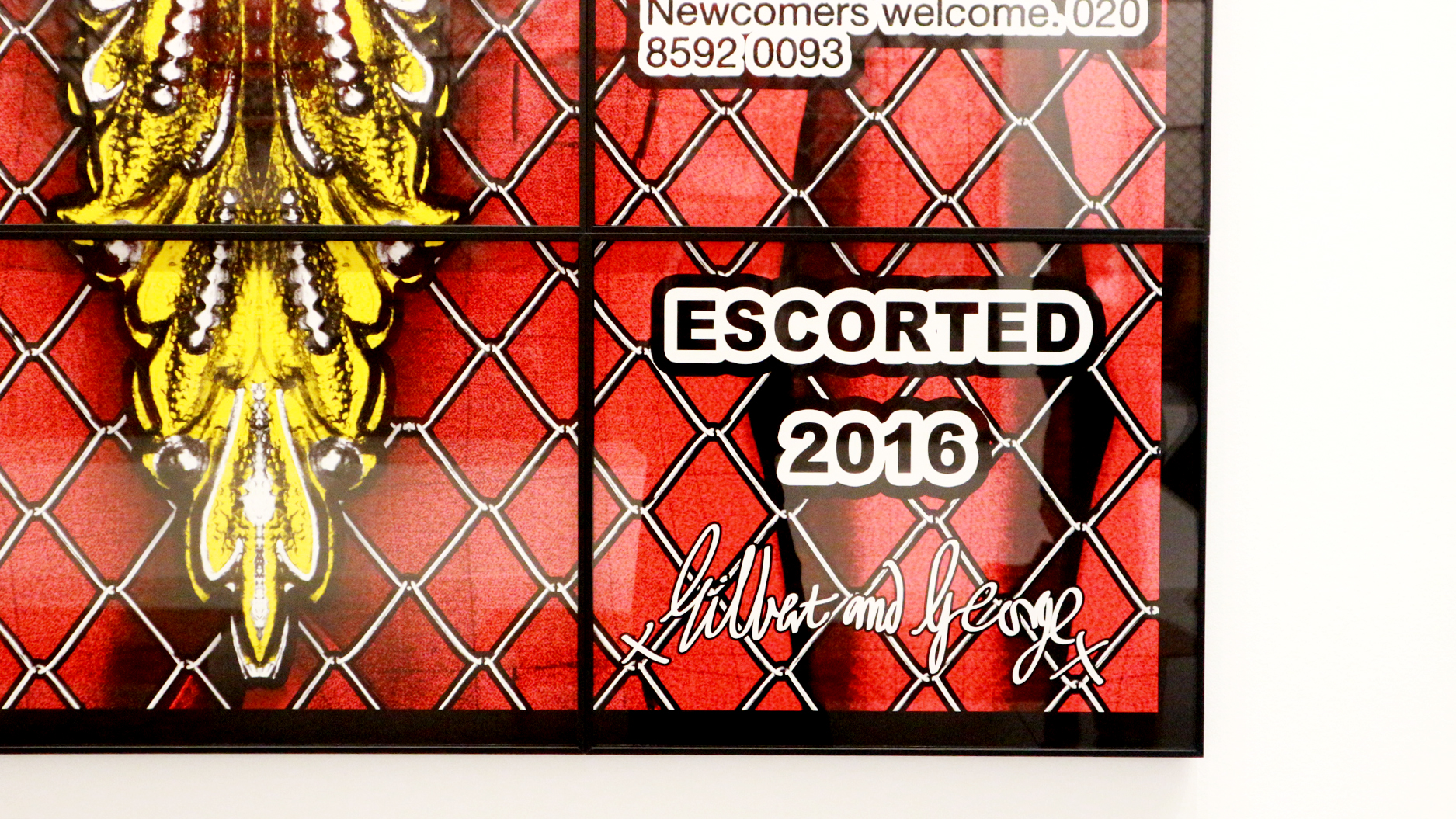 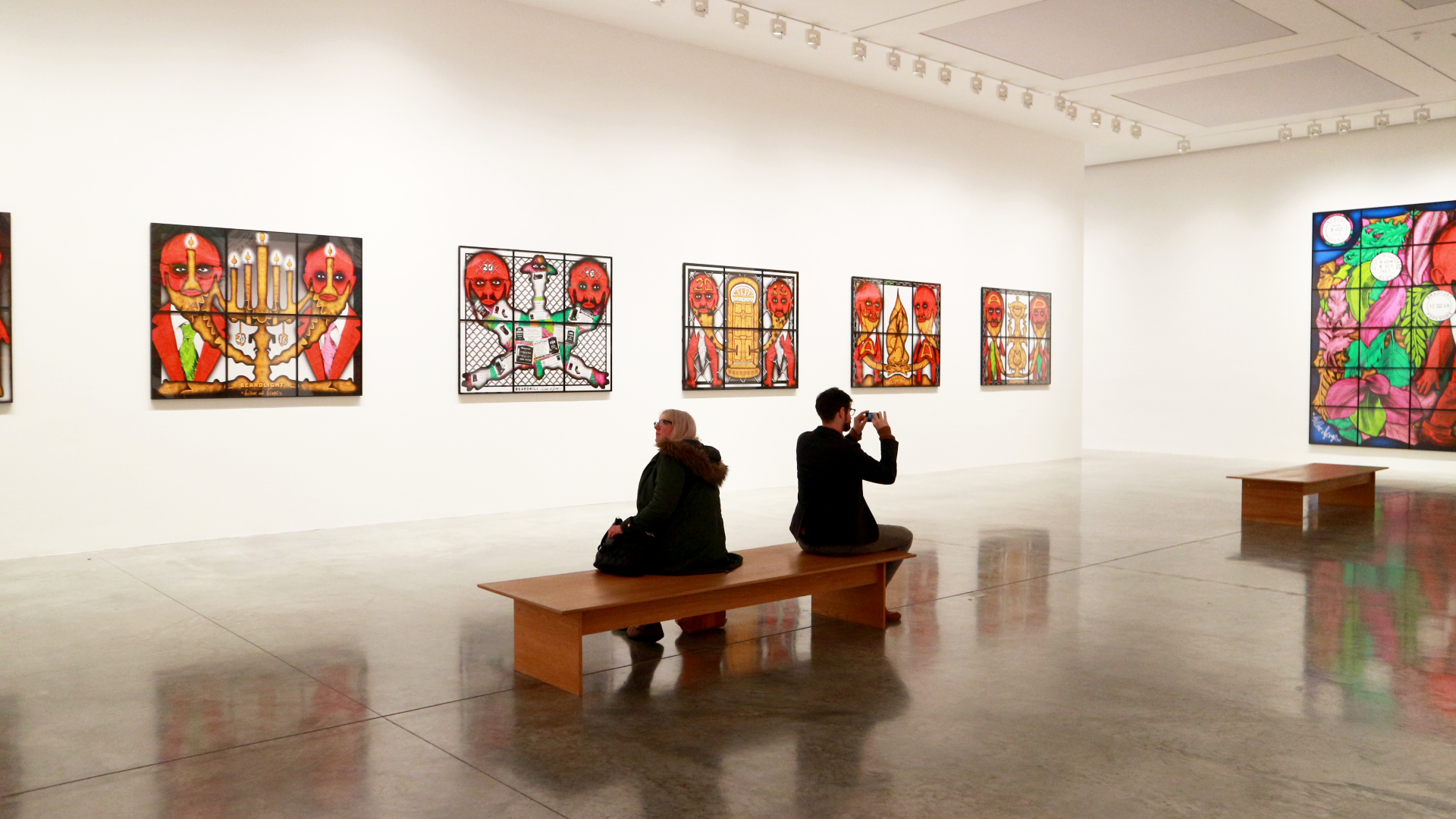 Secular and sacred, the throwback emblem of hip millennial youth as well as a mark of religious faith, the beard is depicted in THE BEARD PICTURES as both mask and meaning: a sign of the times…
Aggressively absurd, trashing contemporary artistic niceties but resonant with intense symbolism, THE BEARD PICTURES turn history into a mad parade, their mood shape-shifting between that of science fiction, lucid dreaming and Victorian caricature…
In the half century that they have lived and worked together as Living Sculptures, embarked on a visionary journey through the modern world, always together and always alone, Gilbert & George have made fiercely singular Anti-Art that is poetic, primal and emotionally driven. Order and madness are held in tension, vaudevillian and nursery rhyme absurdity take on the air of paranormal ritual.
The more the viewer contemplates THE BEARD PICTURES, the more Gilbert & George appear like poltergeists within the cause of art and spirit sentinels within a world gone mad. In this chaos of trashed aesthetics and reversed values, all has become symbol and surface: mad symbols, presented with deadly seriousness. And as such they study the viewer. In keeping with their career-long merger of cultural and artistic provocation, the FUCKOSOPHY of Gilbert & George exhaustively employs the common yet taboo swear word to create a vast directory of absurd, unusual, amusing, bland or memorable statements. As with their GODOLOGY the artists interrogate the nature of a culturally primal word through myriad repetitions, each in a different context. 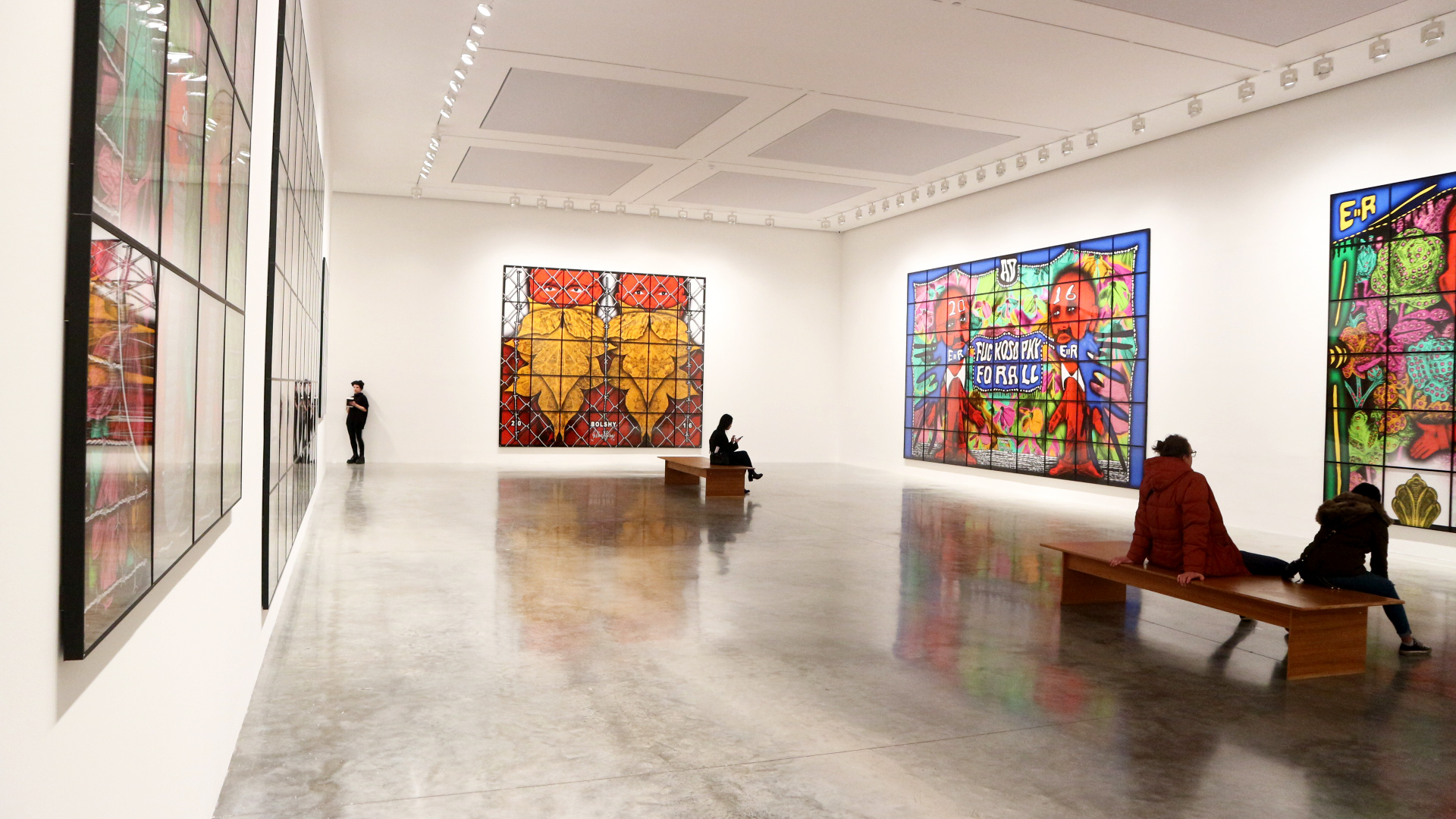